Two more layouts from me

After a full on day looking after my Grand-daughter I was relieved when my dear hubby and son decided to go to the pub giving me time to play in my craft room today! lol

So.. first I looked at the Pixels and Paper blog as a friend of mine is Guest Designer this month.. check out her wonderful layout (after you've finished visiting me of course!) lol. She has chosen a lovely group of pictures to highlight her 'winter themed layout' which is their challenge this month.

Co-incidentally. over at Whitewith1 blog  they chose a beautiful blue called 'Island Paradise' .. which of course can be interpreted as an 'icy' blue too. ..so I decided to combine the two challenges.. which resulted in this layout here. 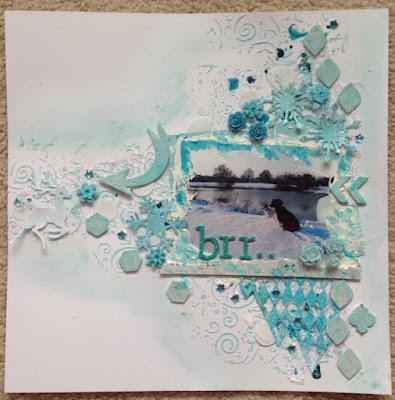 I used lots of texture paste, Adirondack ink and glitter to create this sparkly, icy layout. I painted and inked the chipboard and layered all of the pieces onto white shiny fabric scraps. I also inked and a diamond die cut, snowflakes and chipboard pieces too. Finally I did the same with the directional arrow which I have used to point out the die cut deer.. which is discreetly to the edge on the left. The reason I chose a deer to put there is because that is what my dogs were looking at in the photo. My husband took the photo and they were looking directly at him, then all of a sudden, out of the woods, ran a deer..so he managed to get this shot just before they bolted off after the deer! I love this photo and the story behind of it just had to be told too so as I didn't want to journal on the front, so as I sometimes do.. I journalled on the back instead.

Secondly, the next layout I did was based on this sketch on Sues blog.. Me and Mine 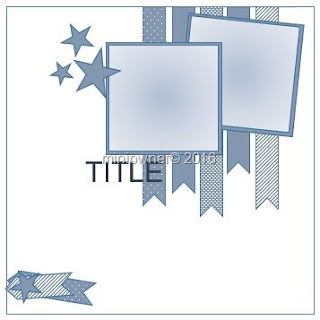 From this I made this layout here..using my birthday photos from this year along with a picture of the dessert which fitted in with a challenge over on UK Scrappers weekly challenge last week. 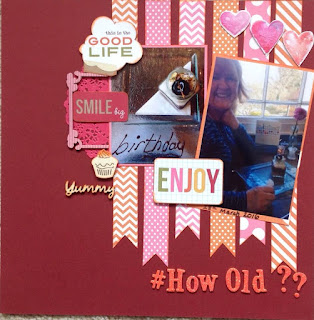 That's all I have time for tonight as I have to go and collect my 'boys' from the pub.. so I'm off now. Thanks for stopping by and do remember to pop back soon!