A mixed media heart from me

Good morning from Kent in my little corner of England!

Today I'm playing along with http://creativeartistemixedmedia.blogspot.co.uk and bringing you a heart that I have made to add to my collection of hearts that I am hanging on my Grand-daughters bedroom wall in our house. I have a small but growing collection of hearts that I am gradually making to adorn one wall. I started out making them all in pinks and reds but I found this too restricting so I am adding different colour hearts now too. 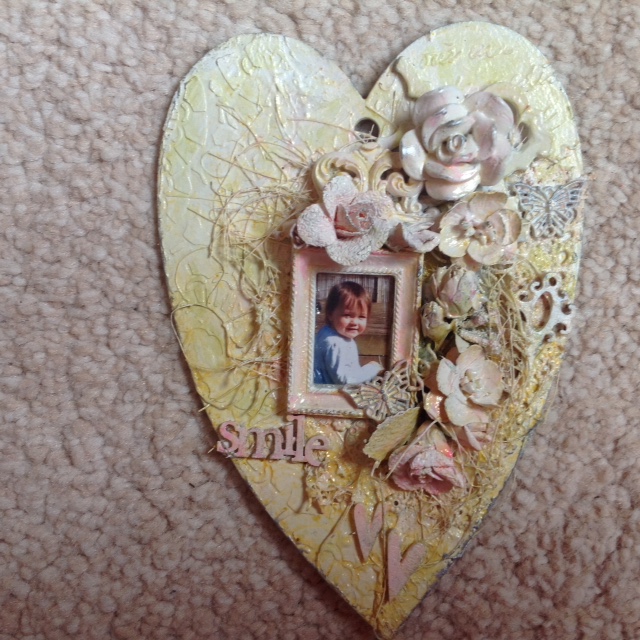 First I took the same heart in chipboard that I have used previously and added Gesso. Once dried I took a stencil and added Daler-Rowney texture paste on one side using a Tim Holtz Layering stencil called 'Lace THS034'. On the other side I used  Crafters Workshop script stencil called 'Mini Art Is'.

Next I used Paper Artsy paint in Chalk. I then added various pale coloured mists including Rangers Perfect Pearl, Tattered Angel Glimmer Mist in Lemon Zest and  light spray of Tattered Angels Walnut Gold. I dabbed with absorbent paper until I got the coverage I wanted. 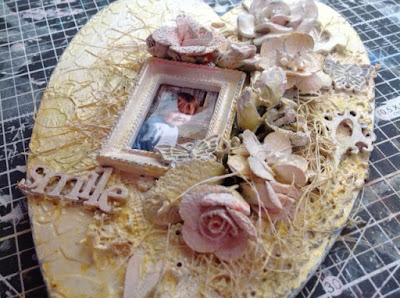 Next I took a (long ago) saved photo frame that I had squirrelled away from an old Christmas Cracker (I knew it would come in handy one day!..lol)  and added a photo of my GD. I used Prima Transparent soft gloss gel to adhere a piece of Moroccan trellis chipboard as the base for my collection of Prima flowers, along with some lace, a Prima Shabby Chic resin flourish, broken jewellery parts, spacers, floral thread and a chipboard key and hearts. I finished off with a chipboard word 'Smile' that I tracked down on a Polish store called 13@rts which is much less expensive than most places in the UK! A good shop and reasonable postage too...

I then gave everything a liberal coating of more of the chalk paint and mists. To ensure the photo didn't get covered in mist too I used a piece of wet kitchen roll over the photo to protect it.

Once it was all dried I realised I didn't like the matte finish of it and thought I wanted it shinier so, finally, I covered the whole thing with DoCrafts Artiste Gloss Varnish. If I'm honest I am not 100% sure about the varnish so will probably cover it with pearl glaze at some point to see if I can improve it. That said.. it's nice to experiment and maybe it will grow on me.. I do love the composition though.. and of course the photo of my GD!

As a final touch I used Creative Expressions Metallic Gilding Wax in Pewter to run on highlights of the arrangement and around the edge of the main heart.

So that's it.. do pop back to see me again soon.