Today I am bringing you something out of my usual remit and, almost, something of a new departure for me... ooh!

At the weekend I watched Helen Mirren starring  in The Woman in Gold...a story about Gustaf Klimts painting of Adele Bloch-Bauer all about his painting..now called The Woman in Gold, that was stolen by the Nazis in WW2.. a worthy watch if anyone is interested in finding out about the restitution of such paintings.

Anyway..I was quite moved by it and it got me thinking..could I create a layout inspired by such an outstanding piece of artwork? In case you are unfamiliar with it, I have shown it here

As you can see it is primarily gold..which in my opinion would have made a difficult colour for me, especially as I have very little of it in my stash! Lol

So..first, I found I didn't have a 12" background piece of gold CS..so I took a sand coloured piece and started working with that..well..suffice to say, I didn't like it, but I'd already distressed it, so I decided to paint it with black gesso..and I had intended to scratch through it to show the sandy gold through the black paint...but that turned out not to be the case! (All the best laid plans and all that....)

Then, as the CS was a bit dull, I needed to make it more luxurious in line with the glamour of my subject matter. This is where I got a bit messy... I used three different pearl mist sprays to create a pooled layer of shimmering golds and yellows..two of which were home made shimmer mists, one called Coral Gold, one I've called Rose Gold (created from an old tutorial from You Tube a while back)  and the other was a Tattered Angels Yellow Zest I hope you can see here the effect that this created? 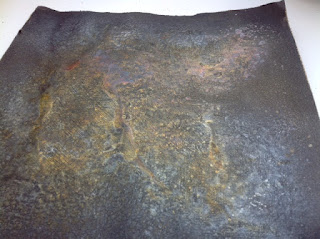 Once the paper had dried and I had attempted to flatten the card, I took some of my new, coveted new stash, Stampin' Ups Winter Wonderland collection that I had recently acquired in their Sale-a-bration. I took the (in my opinion) brave decision to cut it into 2" squares and proceeded to layer them with some thought towards the squares that are in the original. I doodled on some and added vellum printed with gold from the same Stampin Up collection. 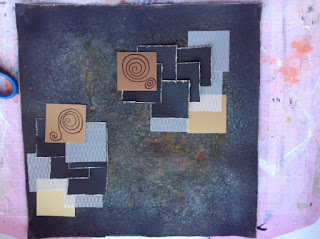 Once I was happy with the arrangement I matted my photo and added it to dimension adhesive to give it some depth. I added, rearranged and altered the squares until I was satisfied. I also added some gold striped vellum washi tape from the same collection too. As I wanted to give a 'nod' to my inspiration I looked carefully at the painting so I could decipher several elements that I wanted to include in my LO. These included smaller squares within the large squares and I used shaped sequins to represent these in the overall scheme. I also noted the diamond necklace Adele was wearing during her sitting and I wanted to include lots of bling and sparkles. With a thought towards using old and new stash (a tip from Glitter Girl, Shimelle in this weeks inspirational video) I dug deep into some incredibly old stash, broken costume jewellery, pearls and more sequins and added them to the black silk flowers that I have had for eons. (I knew they would come in handy one day!)

I arranged these to the right of the photo 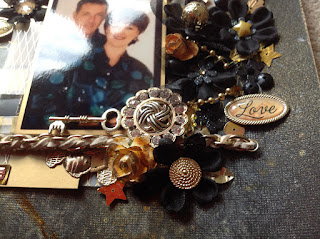 I then made a small cluster to the top left and added a heart. Then I was stuck with placing a title.. I knew I wanted to add 'Photo Shoot' as the title because the picture was taken for a magazine photo shoot that we were in back in the 1990's where we were both treated to a makeover for Bella Magazine (I'd never worn my hair that short... and never have again!)..anyway.. I tried several positions and types of alphas for the title but I wasn't happy with it..so in the end I've decided not to use the title or journalling.. but I have added the story on the reverse side of the LO for posterity.. so here it is in full.... 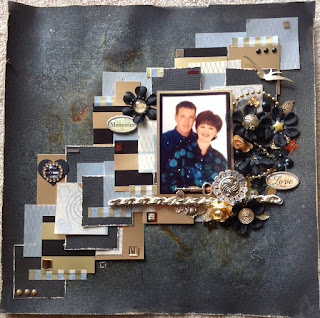 What do you think? Do you think it is a nod to the original...maybe I'll see if there are any other masterpieces that inspire me..maybe this is a new direction for me??? Who knows.. as always, let me know what you think!

Thanks for stopping by!