For the second post of the day, I am bringing you three little tags I've recently made for a swap over on UKScrappers. 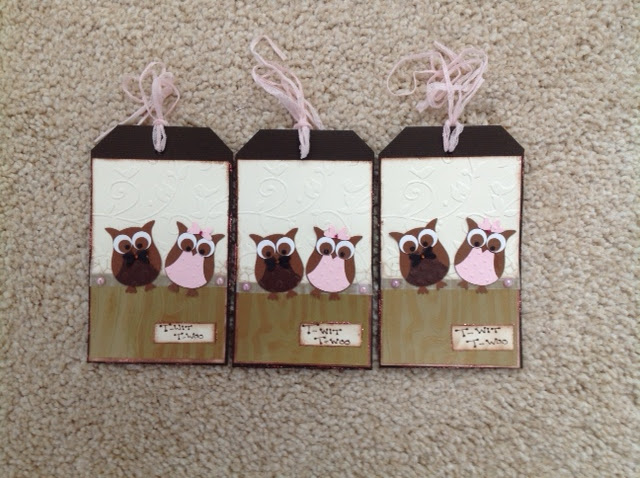 This month we were challenged to use EMBOSSING FOLDERS for our inspiration. Suffice to say I didn't know where to start.. give me some mixed media on something so small and I'm in my element.. but to create something so small with embossing folders had me stumped for a few days.

In the end though I suddenly had a thought that I should be approaching it as though it was a card.. and then, as I had recently bought a Stampin' Up owl punch, I decided I would use that.

First, I took a stencil, yes, not an embossing folder, but a stencil and I used it like an embossing folder with my Sizzix Big Shot. To get a decent impression I had to use a shim to get enough of a rise and then I used it as a mask afterwards and inked some distress inks through the stencil to get the wood effect.

I then embossed three pieces of cream cardstock and stuck the two background pieces together with some Stampin' Up Winter Woodland washi tape which has a small gold vein running through it.

Then I embossed a piece of pink card with a dotty embossing folder and punched the breasts of the female owls. I then punched the rest of the owls from scraps and stuck them all together and added a tiny gem to the bow tie and the hair bows on each owl.

To finish I added two small pink pearls either side of the two owls on each tag and I added a hand written label on each. I them smeared dark pink glittery modelling paste around the edges and I was happy.

In the end, although it isn't my usual style, I was quite pleased with them.. and they are quite cute.. I just hope the recipients like them too.

Thanks for stopping by.