Well here we are again.. you should have found your way here via Margies blog and I am sure you would have been very impressed by her creation.

Now.. of course, it's my turn.. and as Guest Designer for the month of March I thought I would do a mammoth blog with three layouts.. yes that's right. Three! Now.. I blame the designers of the blog for this. The trouble is they set some AWESOME challenges this month.. and as soon as I tried the watercolour challenge at the beginning of the month.. I could not stop making LO's with watercolour elements! AND I have even dabbled with oil pastels that have been lurking in my drawer for years untouched! I have already blogged two watercolour LO's, one from inspiration gleaned from Jennifer Graces blogspot,  and here is the first of my next three LO's. saved especially for this post.

First I took an off-cut of glossy photo paper and started painting it in all the colours of the rainbow after previously soaking the paper with water. Because the paper was glossy the paint flowed randomly over it and I allowed it to settle after first dabbing a lot of the excess off.. and this was the result. 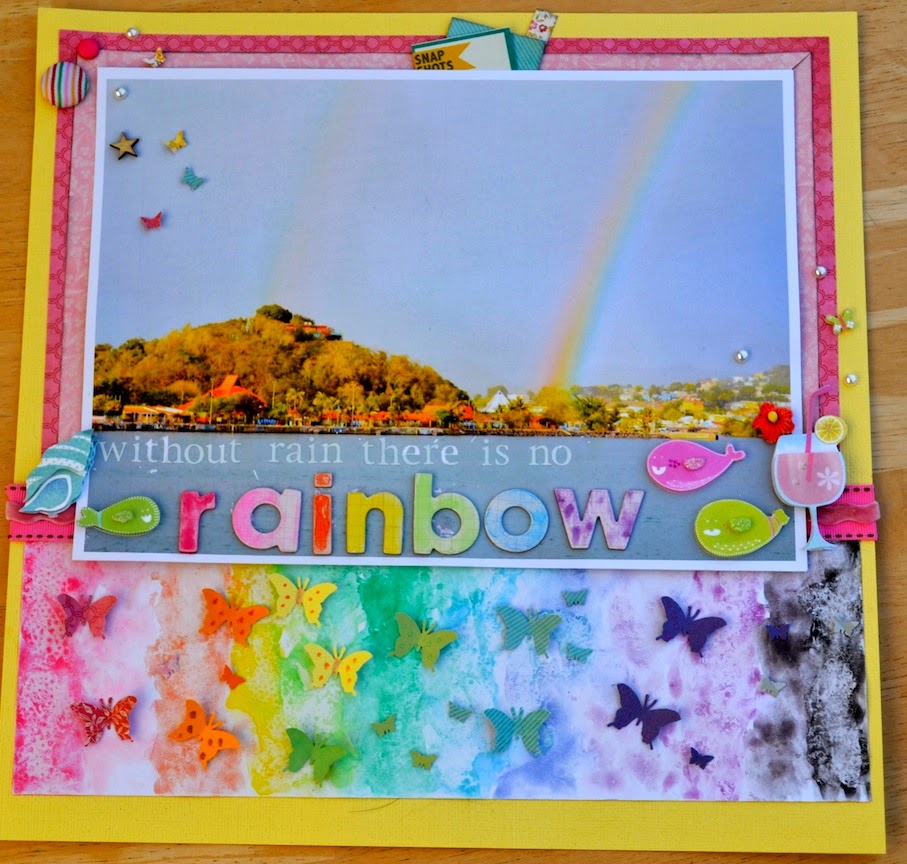 I then added it to this LO which was based on the photo that I took while in St Lucia celebrating my 50th birthday. Unbelievably, while we were driving to a neighbouring Sandals hotel for dinner, this beautiful double rainbow appeared over Castries Harbour ... (I like to think especially for me on my birthday) lol.


As far as the watercolour painting was concerned I was totally out of my comfort zone... but now I've tried it I'm hooked! To finish it off I then added punched co-ordinating butterflies and some other colourful elements and used rub ons for the title. I tucked a tiny tag in along the top with the details of the event.  For the basis of the LO I used a sketch from Creative Scrappers Blogspot encouraging me to use a large photo for once.

For my next LO.. I 'splattered' the paint onto some paper and  also 'splodged' some colour onto another piece and finally I painted a rainbow of pale colours onto some more paper. I cut the rainbow paper into strips to add to the LO and then I die cut circles of the splodged and splattered painted paper. These elements became the basis of my LO featuring circles. 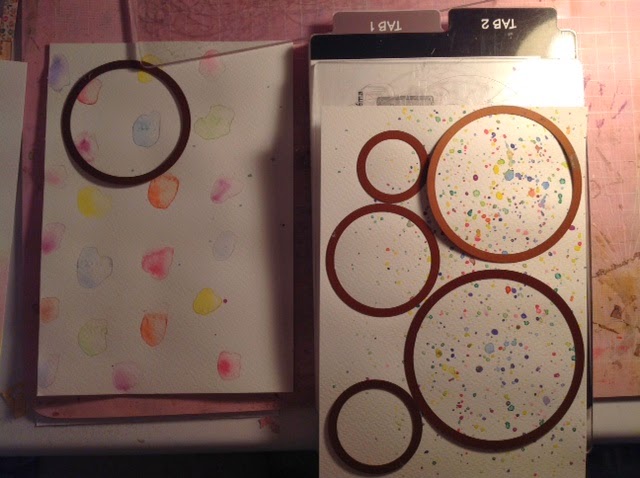 The layout I came up with is one of my 'Mums bouquet' that my son gave me at his wedding last year. He gave the most amazing speech and credited me with turning him in to the kind of man his new wife would want to marry.. I was awash with tears as you can imagine!

The banners were cut from the painted paper rainbow.  Here it is 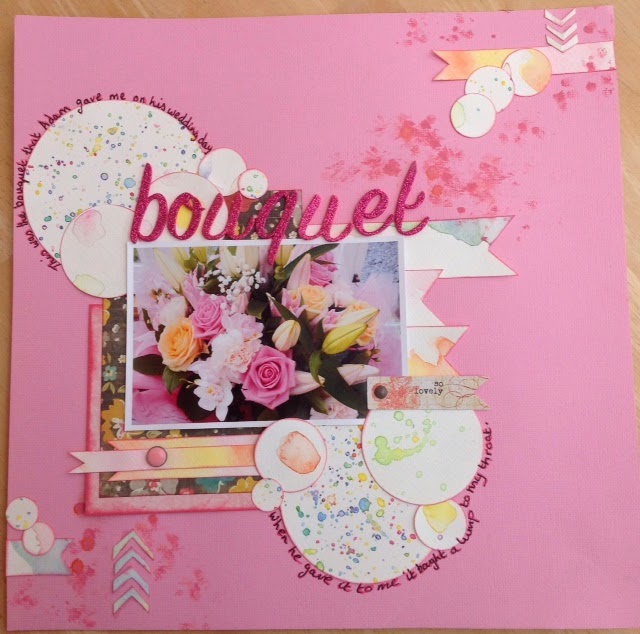 The sketch for this LO came over from Susi Bees Crafty Mess Blog  where she used a sketch that her house mate Sue had set as a challenge over on UKS. I used several circles and banners cut from the painted paper effects and added a pink bling title and some more splodged paint behind the elements.

In the end, although it is quite pretty, this LO didn't turn out as well as I would have liked and I really wanted to scrap the bouquet.. so ... I had another attempt!


The next one was also using my kit papers, but I was really into my 'arty phase' by now so I went for the oil pastels.. and I made the LO below.. which is a different photo of the same bouquet so you get the idea. My younger son, who was best man, helped me by carrying it out of the dining room and just as he did so, the photographer snapped this subtle shot.. I love this natural look of him in the background. As you can see I used some more of the splattered paint circles I had left over from making the LO above. 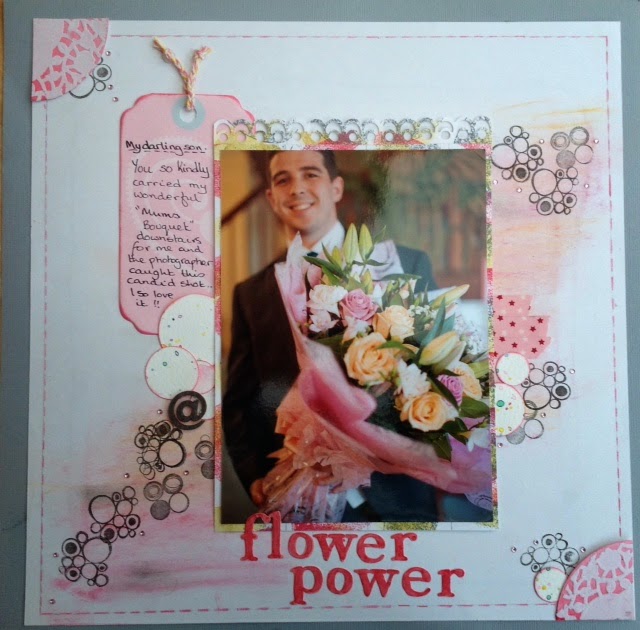 I also used two corners I had made from some water colour painted circles that I  had stuck some doilies over. I then cut it into quarters to make interesting corners and added stamped bubbles on to the background. So here is LO no. 3

The observant among you will also notice that I included some washi tape on the right of the photo.. which had stars on it, so that was also an idea from the designers over on CKCB! As I said they really excelled themselves this month and gave me HUGE inspiration.


I am far happier with this LO and I managed to use up some of my hand made paper behind the photo which I used as a mat. For inspiration I used a sketch that was the March monthly challenge over on UKS too.

Well that's the end of my mammoth bloghop.. but if you want to see more of my LO's featuring water colour and this kit, please do feel free to follow my blog and pop back from time to time.

Next you're off to Lesleys blog where no doubt you'll be impressed with her creativity. Thanks for popping by and if you get lost along the way, please pop back to the CKCB blog where you will find the order again.

Take care all and do let me know you've visited! Thanks for having me as your guest designer...it was an honour to be allowed to play along with so many other artists!