Well it's that time of the month again! I can't believe we're already of a 12th of the way through the year already!!! Don't blink or it'll be Christmas all over again!

That said, the good thing about the way the year is running away with us is that it means there has been another 'reveal' over on the Counterfeit Kit Challenge Blog  and this month they've hit the nail on the head with a great Counterfeit Kit .. here 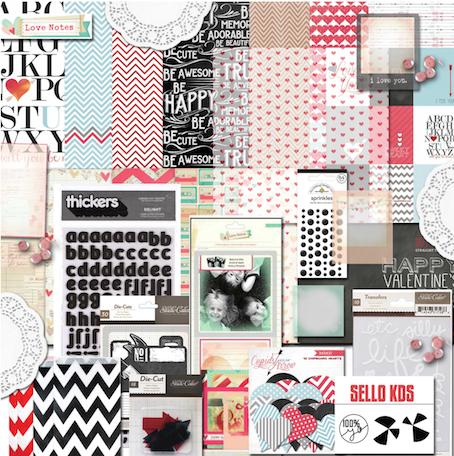 As it's February they have gone down the 'Romance' theme with plenty of black and red with hearts... and although I am OK with using lots of those elements, I wanted my kit to focus a little less on the romance and a little more on the pale blue and blacks with a little red thrown in.

However, when I set about sorting my stash, I discovered I had a lot more heart elements that I expected.. probably because I have a lot of left over heart 'stuff'  from my sons wedding album last year... and, co-incidentally, left over from last months kit.

First I set about finding the patterned papers. I discovered I had some very old Websters Pages paper that I had been wanting to use for some time.. as it had all the right colours on, I started with that and took it from there. I found some red and black heart paper, some red and white chevron paper and a few Theresa Collins Memorabilia range of papers. 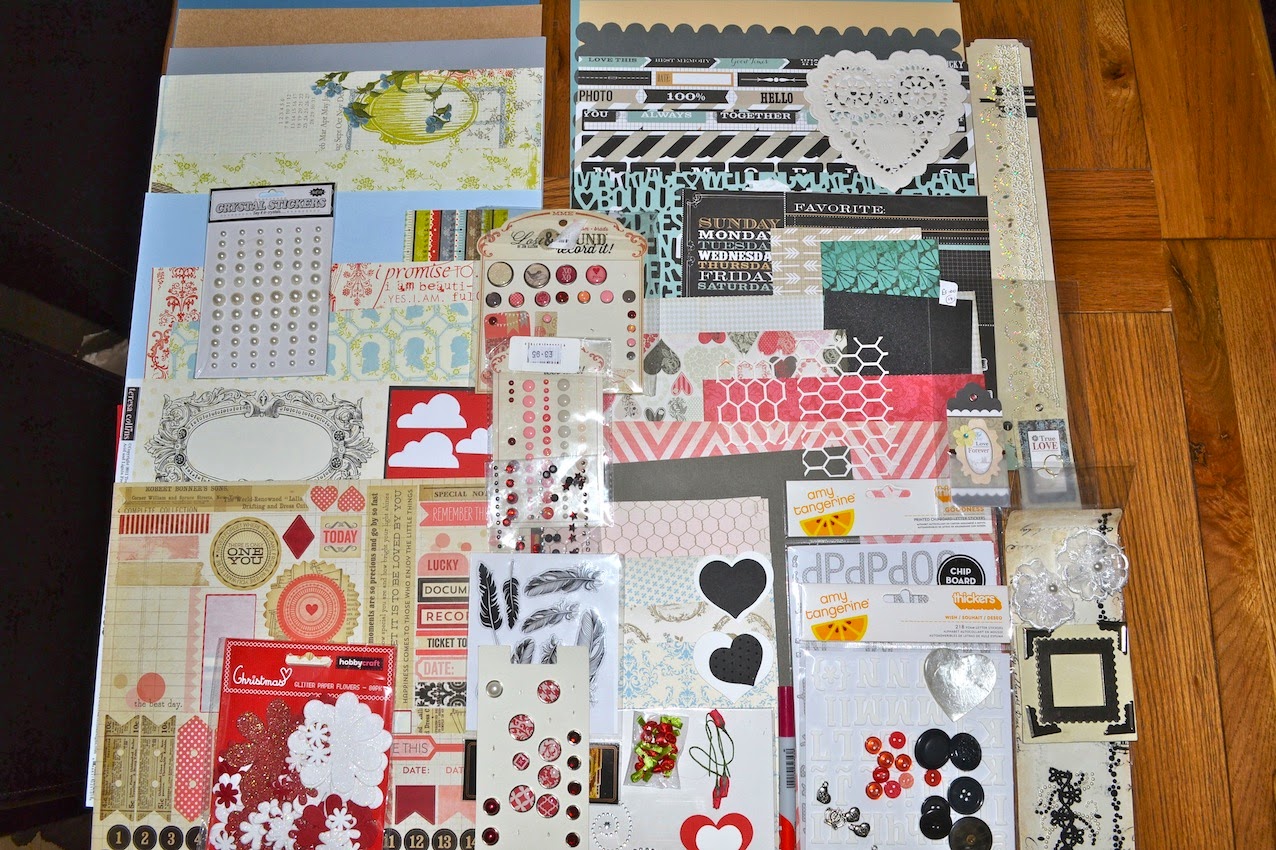 I then sorted out some pale blue, airforce blue, beige craft card and some dark grey card and I was there. I added a few left over scraps of the Websters Pages papers, one with pop out black frames and added a sheet of MME Lost and Found stickers and a few 6 x 6  papers (not sure of the brand).  Then I added some die cut chicken wire, clouds and hearts. 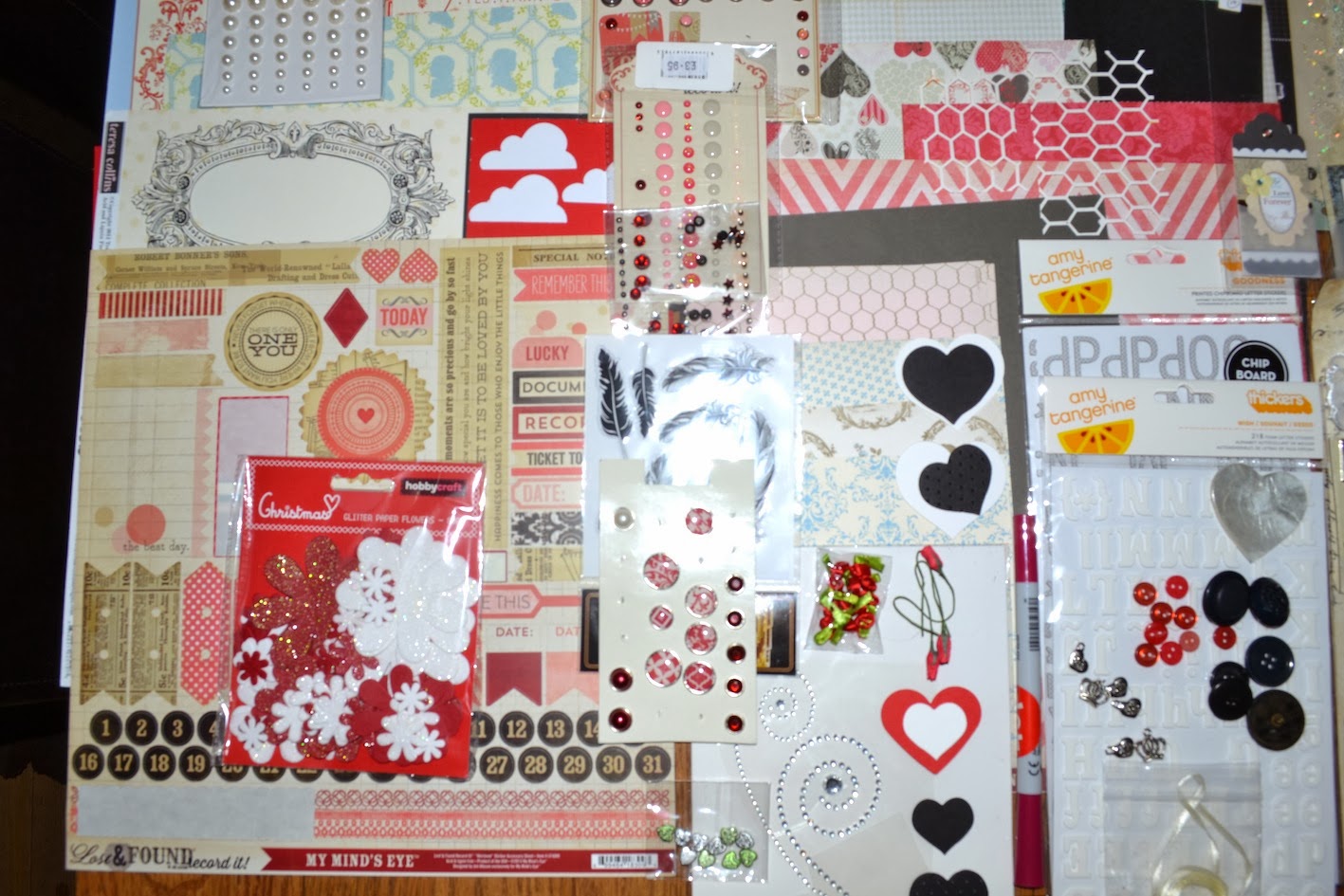 For the embellishments I added some MME Lost and Found brads and enamel dots together with some red and black bling and stars and some Theresa Collins red patterned brads. I then added some tiny red ribbon roses, some small paper roses, red and black buttons and some black feather stickers.

Finally I added a cadiz shell heart, some Prima pearl, gem and lace border trims, a metal frame, some heart charms, lacy flowers, adhesive pearls and two heart shaped doilies with  some red and white paper sparkly flowers. I finished it all off with two sets of Thickers.. one white foam and one grey and white set so I can alter them with the pen. 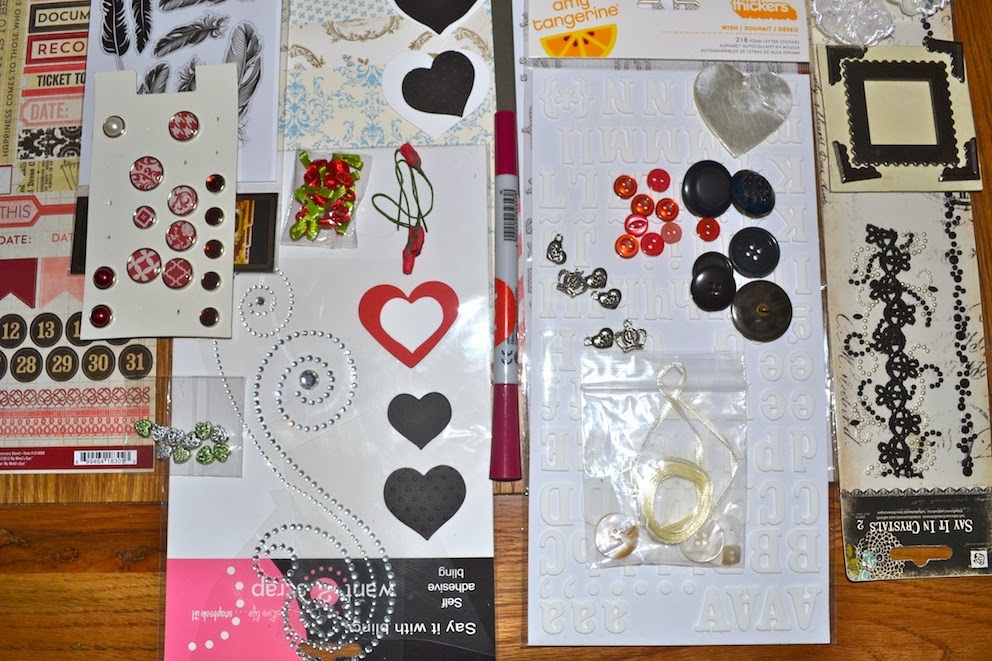 As it ended up as a romantic themed kit I decided to call it 'Hearts and Flowers'. Here is a close up of the embellishments too.